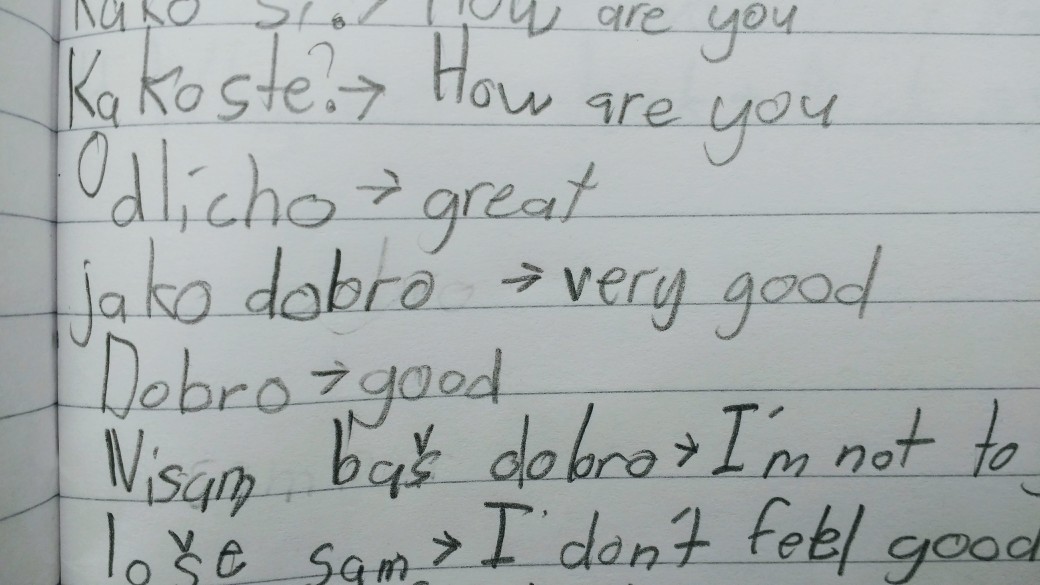 When the doorbell rang and I figured out it was the delivery guy from Croatia Airlines, I was excited. I thought he had come to deliver the last of our lost luggage.

Alas, that was not the case.

Through broken English, he told me he had already delivered a lost bag to our address. “Yes, we got that one,” I told him, “but we are still missing another bag. We were missing two bags,” I said, gesturing with the international peace sign for “two.”

I had already filed a missing claim, talked to a lost and found representative and exchanged phone calls and emails with people with varying levels of English comprehension. But I have a feeling my boys will never see the backpack with their Xbox One game console again. I got an email after the delivery person left that the airline resolved our claim because our baggage had been delivered. I guess I’ll give a missing claim another go.

Still, I’m grateful for every person who has tried to communicate with me in English in this country, even though I can’t speak their language.

This morning, a woman in the Interspar grocery paraded me through the store to show me where the lavender spray was when I asked her through Google Translate what they use to repel mosquitos in the home. Another shopper directed me to the correct package and best price for real butter (maslac). Later, when we were looking for the fish market in Old Town, a 20-something man switched languages to tell us in perfect English where to go and the best time to get there. Even the boys’ school principal, who has been a wealth of information, apologized when I met with her and she was stumped on an English word. I told her I should be the one apologizing.

When I found out we were moving here, I started a Croatian language tutorial and quickly gave up, deciding it was too hard. Now I’m ready to try again.

I blend in enough here that most people I encounter speak to me in Croatian, and most of the time I don’t know how to respond. I know it doesn’t cut it when I look at them and shrug: “English?”

I’m getting encouragement from my 11-year-old. Of all of us, “A” may be assimilating the easiest. He just had two boys come into the yard and ask him to play. He met them yesterday, when they called him “the American.” Today, they know each other’s names, and they have another soccer, uh, football date set for 7 p.m. in the neighborhood playground.

After school yesterday, “A” handed me his notebook so I could brush up on my language skills. He’s been a good note-taker, even if it hasn’t been officially part of his classes. He writes down what people say, from the way they great each other to the days of the week. My favorite entry so far was this drawing from science class:

When we got home, I placed Post-It notes around the apartment with Croatian words for phrases such as “good morning” and “good night.”

Sarge and I have been studying a toddler picture book to see if we can get anything to sink in.

Our 11-year-old assures us we’ll catch on. We just need to take notes and practice. I think we have a lot to learn from him. After our lesson, we should go out and play and make new friends. I think that is how it is supposed to work.

2 thoughts on “Lost in Translation”

Wish You Were Here

This is the online journal of my family's adventures abroad. We're moving to Croatia and making it the trip of a lifetime.

I'm new to WordPress and to being my own IT person. If you have tips on how I can improve my site, please let me know.
%d bloggers like this: